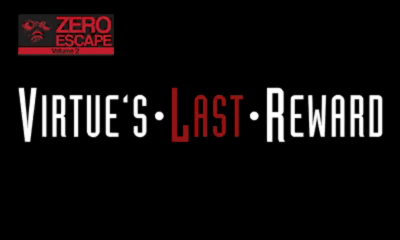 I’ve said this once before, during the intro to my review of Portal 2, but I feel it is worth repeating for this game as well: Virtue’s Last Reward is in the awkward position of being a sequel to a game so fantastic that by design it becomes excruciatingly difficult to live up to expectations. Zero Escape: Virtue’s Last Reward is a sequel to 999: Nine Hours, Nine Persons, Nine Doors, one of the extremely few games to receive a grade of A from those of us writing reviews at Gaming Bus. The game was nearly perfect: the exposition and plot twists were flawlessly executed; in the end all loose ends were tied and holes covered, and there was a sense of ultimate closure regarding the events in the game.

There was no way that Virtue’s Last Reward could surpass 999 with the bar set so high to begin with. It just couldn’t happen. After having completed literally everything in this game, I can say I was right. However, the developers of Spike Chunsoft have definitely taken lessons learned from 999 and improved these things in VLR. As a direct result, the game comes very close to 999 in terms of excellence. I should note that while I could give a lot more detail to support my claims here, I intend to make this review as spoiler-free as possible. This means I will be rather vague when speaking about the plot in an effort to ensure that those reading this review will enjoy the same experience as I had when they play it.

Much like the first game, VLR revolves around large amounts of exposition and 16 puzzle rooms. The main character, Sigma, and 8 other participants have been kidnapped; they must accrue a total of 9 or more points to open the number 9 door and exit the facility. The nonary game is back, but in a slightly different form than before: VLR uses the additive color system and mixtures of colors to determine who may pass through the chromatic doors into each puzzle room. Completing a puzzle room rewards the participants with a keycard to the AB rooms, in which they must play a game-equivalent of the prisoner’s dilemma to obtain points, sometimes at the risk of their lives.

For all intents and purposes, the game is a visual novel with a puzzle game mixed in. Choosing different puzzle rooms and AB game decisions results in different outcomes. There’s a total of 9 true endings, 11 bad endings, and a single hidden ending which is received for beating the game after completing all archives and (gold) secret files. Each pathway results in a different ending, making this game much closer to a visual novel than its predecessor. This is also where the game shines most: your progress in the storyline is tracked by a flowchart accessible via the “FLOW” button at the bottom of the touchscreen. Using this flowchart, one is able to skip to a completely different section of the story.

This greatly expedites the process of playing out a path made by a different decision. When you wanted to make a different decision in 999, you were forced to start from the beginning and use the skip function to quickly pass through already-viewed text until you reached the decision you wanted to make differently. While the skip function still exists in VLR and becomes very useful when the overlap in text is high between two decisions made in the same path, the flowchart allows you to instantly skip to the decision rather than waiting for tens of minutes. Spike Chunsoft also did a much better job ensuring that puzzles are not repeated for different paths in VLR. Whereas in 999, puzzle rooms were often repeated on the way to different endings, VLR has been designed so that changing a decision will nearly always lead to a different puzzle, resulting in a more diverse experience.

Likewise, solving a puzzle room ultimately leads to receiving a password for a safe that contains the key to exit. This password does not change for this room no matter what decisions are made. While for the most part, this isn’t particularly helpful due to reasons explained above, it does occasionally come in handy. This is an improvement obviously made in the shadow of 999. One of the most bothersome things in 999 was having to re-solve a puzzle, especially when you forget a small detail. Given that the passwords in VLR are recorded as part of an in-game “file”, this makes it easy to skip through a puzzle you’ve already solved once. It is also worth noting that a few of the puzzles feel more challenging than those in 999. Combined with the extra difficulty of obtaining the secret files, there is much to be had for those who enjoy the challenge. Plus, if you’re having trouble, you can always switch the puzzle to easy mode to obtain hints.

Another good feature I glossed over earlier is the archive. When combined with the memo function and dual screens of the 3DS this makes it relatively easy to take notes and solve puzzles without the use of pen-and-paper. The memo acts as your paper and the 3DS stylus, your pen; selecting the memo function while viewing a file from the archive allows you to view the archive file on one screen and take notes on the other. While you are solving a puzzle on the touchscreen, you may then call up an archive file or your memo to display on the top screen. These functions are extremely helpful and my only issue is that I wish the memo function had more than just 2 pages.

Like its predecessor, Virtue’s Last Reward excels in its writing – well written with the amazing plot twists I’ve come to expect from this series. However, one caveat is that as much as the title tries to be insular from the previous title, it fails in this respect. There are often plot devices, people, and other references that only truly make sense when viewed with knowledge of the first game. While as a sequel it performs well, I am simply unable to recommend playing this title without playing 999 first. Another caveat is that the title does not provide nearly as much closure at the very end. While the events surrounding VLR‘s nonary game are fully explained, doing so reveals the game as part of a larger story that is not yet resolved. As it has already been revealed that Spike Chunsoft is working on a sequel, this leaves VLR as an in-between title; unfortunately, this forced VLR not only to expound on the after-events of a game that was never guaranteed to have a sequel, but also to build the foundation for the following game.

Simply put, VLR falls short of 999 due to lack of focus. While it is still by far an excellent title worthy of being named one of the best games this year, by design it is unable to encapsulate its story well enough to give the same emotional response evoked by the ending of 999. The intelligent story design is still there and I personally found myself once again playing for long hours each sitting due to the compelling narrative, but in the end we’re given metaphorical blue balls at the climax of the story, with an obvious nudge towards the plot of the next game.

There is one facet of storytelling that VLR actually surpasses 999 in: character development. Because there is a true ending for each character and side characters have much greater importance, I actually developed a much stronger attachment to each character by the end of the game. This is a pretty important change from 999, where some of the side characters, while important, did not have quite enough development to them. The decision to make particular endings revolve around particular characters was definitely a good one.

Finally, there is one major problem with this game that needs to be addressed: saving in a puzzle room can corrupt your save in the 3DS version of this game. It’s a well-known bug by this point and will hopefully receive a patch in the future, but the gist of it is that while particular rooms such as the Crew Quarters and PEC may have a highly increased chance of corrupting your save, it appears to be a problem in any puzzle room. Thankfully, I was not affected by this, although when I first created my save file I did receive a “game save corrupted” message. I have found that as long as your are in a narrative portion of the game, you may save without a problem. But the fact remains that this is a game-breaking glitch, and not everyone is aware of it. It is also important to note that the Vita version of the game does not experience this same issue.

Overall, the game is fantastic and well worth the time I put into it. It does fall a bit short of my expectations, but 999 set the bar much too high. Combined with the game save bug, that renders this merely an excellent game, rather than a phenomenal game. Let me be clear: this game would have a higher rating were it not for the game save bug. That said, it is worth the time and money of anyone who played the first entry in the series. If you have yet to do so, I highly recommend picking up 999 and playing it before venturing into this game. Both games are relatively short: 999 averages around 25 hours, while VLR averages around 30. This means it wouldn’t take any longer than your average RPG to play through both. I just pray the eventual sequel makes its way stateside when and if it is finished. Aksys’ localization was overall great and if we eventually do see another game, they would likely be the ones delivering it.

CONS
* Save corrupting glitch
* Text-heavy: May discourage some gamers
* Story lacks closure; sort of a lead-in to the next game

Disclaimer: This game was purchased by the reviewer and not provided by Aksys Games. At the time of writing, the reviewer had played 34 hours and 15 minutes, achieved all the endings, and fully completed the archives and gold files.

This site uses Akismet to reduce spam. Learn how your comment data is processed.